Step into the boots of a Starfleet officer taking command for the first time -- in the sink-or-swim circumstances of a disaster in deep space. A sun erupts unexpectedly, damaging the player's ship and killing the captain. As the next ranking officer, the player takes the command chair and the mission of discovering the cause of the deadly blast. Through investigation of the strange stellar explosion, the fledgling captain is drawn into an epic plot involving the Cardassians, the Klingons, and perhaps even the Romulans. Forces behind this unexplained 'accident' may threaten the foundations of the Federation itself.

The game offers a first-person perspective from the captain's chair for a useful view of the 3D bridge and its officers. As in the television shows and movies, the bridge crew is well trained to report pertinent information and await orders. Star Trek: Bridge Commander is designed for compatibility with many contemporary voice-control peripherals, allowing the hardware-equipped player to issue commands by speaking them. The game's story was developed with the help of D.C. Fontana, who wrote four episodes of Star Trek: The Next Generation and served as an associate producer for the series.

From developer Totally Games and publisher Activision comes a Star Trek title worthy of its (licensed) name. It seems that the conundrum of representing space combat among Federation starships (which in prior titles has proved to be elusive) has been resolved not only effectively, but in a manner that is true to the series, graphically awe-inspiring, and delightfully fun to play. Players will be able to issue commands to their crew (and enjoy the visual splendor said commands produce) as a true Federation Captain would, and still have time to wave their fists in the air and yell, 'KHAAANNN!'

Due to the fact that Federation ships are much larger than a tiny, one man dogfighter (ala Wing Commander), commanding one in past titles with a joystick during a dogfight felt.. well, wrong. Any Captain worth the salt that Dr. McCoy's ex-girlfriend would suck out of them would tell you that a true Captain would make command decisions to his crew from his chair. The problem, understandably, in the past has always been how to do this in a video game and still make it fun to play?

Totally Games has delivered. Although at times Bridge Commander will feel more like an old-school point and click adventure than a tactical sim, the formula works extremely well. There is a high degree of scripting going on here, and the game is pretty much on rails in terms of story progression, but once you immerse yourself into the world Gene Roddenberry created, you'll hardly notice that you're being nudged in one direction or another.

The graphics outside the bridge will astound you, and represent Star Trek perfectly. The graphics inside the bridge are a bit flat and dull, but I can see where the tradeoff made sense. The ships are as beautiful and detailed as one seen on television, complete with deep, rich color and lighting effects. Performance on mid-range machines is still excellent, although would have to be not-as-detailed. There are a few points of view to choose from, including 'from the chair' on the bridge and an 'outside the ship' view. The view from inside the ship tends to be more like living through a combat-heavy episode of the television series, whereas the outside view, albeit prettier, tends to suck you out of the Star Trek universe in a way that will leave you feeling like you're just playing another space-combat sim. 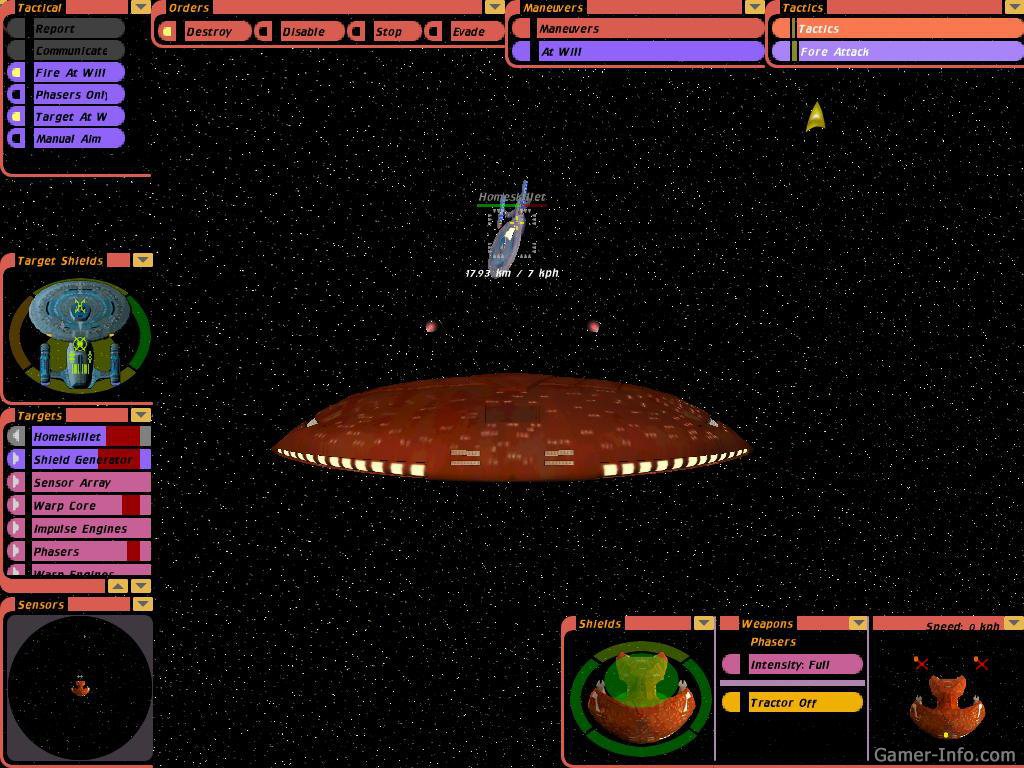 The sound effects and music are lifted directly from the Star Trek world, so all of the phaser blasts, photon torpedos, explosions and such will sound familiar. The music is also comprised of such well-known scores, rounding out the package into one of complete Trek immersion.

Gameplay centers around the player as the newly-recruited Captain of a damaged vessel, making their way through the mystery of their situation, one waypoint at a time. Players issue orders to the crew, who then perform the actual commands. The voice of 'you' is never actually heard in the game, as orders are delivered by clicking on menus that come up on screen when you position the mouse over a specific person's station on the bridge (these menus can also be assigned to keys, eliminating the mouse). Those who are used to the fast paced dogfights of other titles may need a while to become acclimated to the different pace of these bohemoth starships. They don't turn quickly or maneuver like an X-Wing fighter would, and the combat is more of a chess game than an out-and-out dogfight. Particular systems on an enemy's ship can be targeted (shields, weapons, etc) which adds to the depth of the combat greatly. This class of ship does not explode into a ball of fire with one shot, but you can tear off entire chunks and make holes.. in some ways, it's more gratifying to cripple than obliterate (I'll have my therapist look into that one). A good starship Captain will also know how to manage his vessel's power distribution, especially after the drain that combat can put on it. Certain systems may need special attention if they become particularly damaged or drained as a result of the melee. 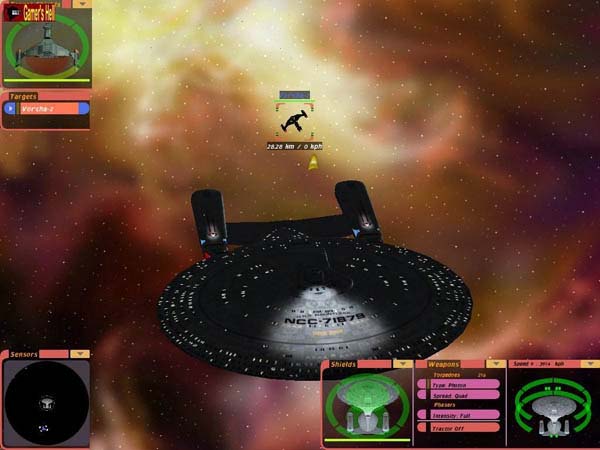 Trek fans will be pleased to know that both Patrick Stewart and Brent Spiner make appearances, and there are even a couple of missions that center around their characters. The overall single player experience is quite short, and the multiplayer aspect (which is missing the 'location specific' damage modeling and is played strictly from an outside viewpoint with manual control) is your normal deathmatch, team deathmatches, and 'defend the starbase' matches. The save system is automatic, saving your progress between each mission. However, players cannot save wherever they like, so if one fails 90% of the way through the mission, it will have to be replayed over again. This does add a bit to the frustration factor, but the developers included the ability to have the ship repaired at the Starbase between battles. 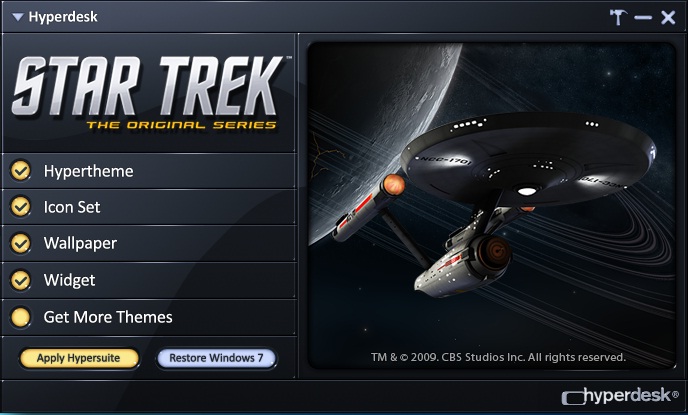 Although on rails and a bit twitchy in terms of stability, Bridge Commander has delivered an impressive, immersive title that finally has captured the essence of Star Trek and is like a rollercoaster.. Adobe photoshop cs6 free download for pc. fast, intense, and over before you know it. 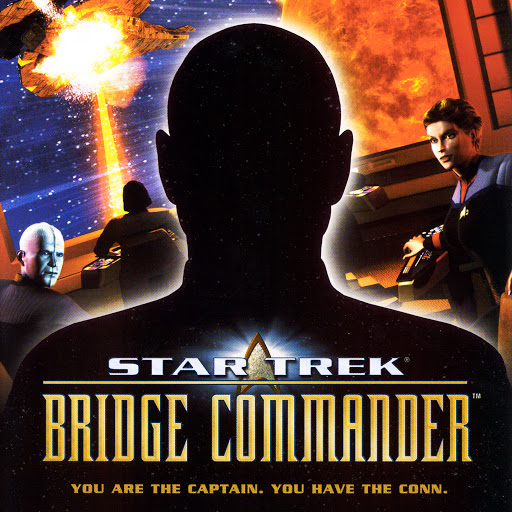 For a while back there, Bridge Commanderooked like it was teetering on the edge of existence, as mumblings about quality control wafted about the PC games industry. However, it seems that Totally Games has got its act together, because Bridge Commander is showing signs of being a game to keep a watchful eye on, both for die-hard Trekkies and action/strategy fans alike.

Taking the captain’s seat you’ll have to order your crew members around to make your ship the ultimateintergalactic fighting machine. Your crew include a first and second officer, helmsperson and engineering officer. Totally Games claims the finished product will feature 'The most accurate ship models ever in a Star Trek space sim, painstakingly recreated with materials taken directly from Paramount Archives,’ which means fans can be assured of total authenticity.

Battles will be hugely reliant on tactical knowledge, with each ship having its own strengths andweaknesses which can be exploited to you or the enemy’s advantage. Totally Games eagerly boasts that each battle will provide 'Dramatic combat with large capital ships possessing significant firepower but limited manoeuvrability that will require smart weapon management and skillful manoeuvring to defeat your enemy.’ Star Trek fans should start getting excited now, because Bridge Commander is beginning to look more appealing than Seven of Nine in a skintight Lycra catsuit. Put it away..