AEM-7 locomotive No. 901 wears the Amtrak Phase III livery introduced in 1979. Amtrak contracted with General Motors Corporation's Electro-Motive Division (EMD) to design and manufacture the AEM-7, and the first units had car bodies built by Budd. Amtrak eventually ordered 54 of the locomotives. The AEM-7 was the first successful passenger locomotive design used by Amtrak, which was created in 1971. The design was based on a Swedish locomotive which was imported in 1976 for testing. The AEM-7 was intended to be a general-use passenger locomotive on the Northeast Corridor and introduced high-horsepower, high-speed, lightweight European. Fine diesel locomotive models built from real steel in 1/1.5/1.6' scales. H0 MASTER AEM-7/ALP-44 LOCOMOTIVES In the mid-1970s Amtrak was looking for a suitable replacement for the famed GG1 electric locomotives which had been in service since the mid-1930s. Domestic designs were considered, but the approved locomotive design was presented by the Swedish firm ASEA.

This past Saturday, June 18, 2016, Amtrak and rail fans said goodbye to the legendary AEM-7 electric locomotives that for the last generation have pulled passenger trains along the Northeast Corridor spine (Washington-New York-Boston) and Keystone Corridor (Philadelphia-Harrisburg). Sometimes affectionately referred to as “toasters” and “Swedish meatballs” due to their compact, boxy design and Swedish origins, the AEM-7s first entered service in May 1980 and since then have traveled more than 220 million miles.

AEM-7 No. 942, followed by No. 946, pulled a special excursion train that departed Washington Union Station en route to Philadelphia, with an intermediate stop for photos. In the City of Brotherly Love, the train turned on the wye trackage near the Philadelphia Zoo, including over the New York & Pittsburgh Subway and other connecting trackage in the Philadelphia terminal area not normally used by passenger trains.

The group then headed for a rare visit and walking tour of the Amtrak heavy maintenance facility in Wilmington, Del., where skilled employees maintain, repair and overhaul electric locomotives used on the Northeast Corridor (NEC). Attendees again enjoyed the opportunity to take photos with a variety of equipment, including Amtrak Cities Sprinter (ACS-64) locomotive No. 642, which wears a patriotic red, white and blue paint scheme to honor all those who have served in the armed forces. They then re-boarded the train for the trip back to the nation’s capital. Watch a video montage of the day's activities up above or on the official Amtrak YouTube page.

In early 2014, the first of 70 new ACS-64 locomotives were placed into service, allowing for the phased retirement of the AEM-7s, which had reached the end of their useful lives. Designed by Siemens, the dual-cab ACS-64s have a peak 8600 horsepower and run at speeds up to 125 mph. A regenerative braking system can feed up to 100 percent of the energy generated during braking back to the power grid. Safety is paramount with enhanced crash energy management components such as crumple zones, while a microprocessor system allows for self-diagnosis of technical issues. The last ACS-64 was delivered to Amtrak earlier this month.

Below we celebrate the distinguished career of the AEM-7 fleet through images from the Amtrak Archives and the collections of talented photographers who also happen to be part of the Amtrak family.

In the mid-1970s, Amtrak began searching for a new electric locomotive to replace the reliable but aging GG-1 electric locomotives that had been built for the Pennsylvania Railroad in the 1930s and 1940s. Amtrak settled on the General Electric E-60, whose design was based on existing freight locomotives. Intended to reach speeds up to 120 mph, the E-60 proved too heavy, placing great stress on the rails when operating at high speeds. Amtrak thus renewed its search for a faster unit.

Amtrak contracted with General Motors Corporation's Electro-Motive Division (EMD) to design and manufacture the AEM-7, and the first units had car bodies built by Budd. Amtrak eventually ordered 54 of the locomotives. Considered lightweight at 101 tons and built to achieve top speeds of 125 mph, the dual cab AEM-7 became the mainstay of NEC services. Each had 7000 horsepower and measured approximately 51.5 feet long and 12.5 feet high.

On May 9, 1980, dignitaries gathered at Washington Union Station to mark the entry of the first AEM-7 into revenue service. Congressman Robert W. Edgar, whose district included part of southeastern Pennsylvania, christened locomotive No. 901 with a bottle of champagne as seen in the photo above. Behind him, from left to right, are: Arne Mark, ASEA president; Peter K. Hoglund, General Motors Corporation Electro-Motive Division general manager; Louis Thompson, Federal Railroad Administration director, Northeast Corridor Improvement Project; and Tom Hackney, group vice president for Amtrak operations and maintenance. Following the ceremony, No. 901 departed Washington for New York leading Metroliner Service train No. 108.

Unlike the earlier E-60s, some of which had been built with steam generators to operate with older cars, the AEM-7s were designed for all-electric service, whether with the then-new Amfleet cars or older cars refurbished to operate with head-end power.

By early 1982, AEM-7s and Amfleet cars replaced the original self-propelled Metroliner cars designed in the late 1960s for high-speed service between Washington and New York. Due to completion of major infrastructure improvements made under the Northeast Corridor Improvement Program, Amtrak boasted in fall 1982 that limited-stop New York-Washington “Metroliner Express Service is the only way to go from downtown to downtown in just 2 hours and 49 civilized minutes.” 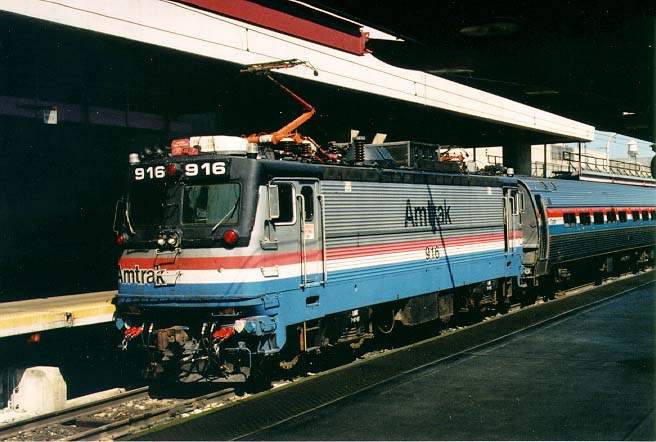 The 1983 Amtrak wall calendar featured a painting by noted artist Gil Reid. Against the inspiring New York City skyline, which includes the World Trade Center towers and the Chrysler Building, the Boston-bound New England Metroliner led by AEM-7 No. 946 passes museum-bound GG-1 No. 4935 on the Hell Gate Bridge that carries the NEC between Long Island and Randall's Island/mainland New York. Reid depicts the retired GG-1 on its way to the Railroad Museum of Pennsylvania, where it remains on display today.

No. 934 sits over an inspection pit at the Race Street Engine Terminal north of Philadelphia 30th Street Station in May 1997. The pit allows skilled Mechanical department employees to examine the underside of the locomotive up close. Image by Gary Pancavage.

Change is clearly visible in this October 2001 photograph showing AEM-7s Nos. 915 and 911 at the Ivy City facility north of Washington Union Station. The former wears the Phase III paint scheme introduced in 1979, a year before the first AEM-7 went into revenue service. No. 911 wears the new Phase IV paint scheme unveiled in 1993. Image by Gary Pancavage.

“I believe they were converting this locomotive from DC to AC traction as well as repainting it into [the] Phase IV [paint scheme],” photographer Matt Donnelly says of this 1998 image taken at the Amtrak Wilmington Shops. “If you look close you'll note the unit is stripped of all its electrical connections, many under carriage components are removed, and the roof panels have been taken off.”

In the late 1990s and early 2000s, Amtrak converted 29 AEM-7s to AC power under a partnership with Alstom. The latter designed and built the propulsion and auxiliary power systems, and Amtrak prepared the car bodies and trucks to include painting and the installation of new cables and cab control consoles. The end result was remanufactured units that required less maintenance, provided greater reliability and had the ability to haul longer trains.

On a January day in 2000 at the Ivy City facility in Washington, D.C., No. 907 wears the next-to-last paint scheme used on the AEM-7s. Incorporating blue and silver, it was introduced as part of a larger corporate brand refresh that also included a new service mark to replace the original inverted arrow from 1971. This scheme was soon enhanced by the addition of the new Amtrak service mark on the front and sides of each cab.

The Amfleet I cars pulled by the locomotive are also rather interesting to the rail fan. As part of the corporate brand refresh, all Northeast services were folded into the new Acela brand. The short lived paint scheme shown here was intended for Acela Regional service, which encompassed the former NortheastDirect (known today as Northeast Regional), Keystone Service and Empire Service trains. The color blotches are known as “mobile designs,” and their colors indicate the car use. For example, the combination of an Amtrak blue window band with light blue and green mobiles indicated a food service car. Image by Gary Pancavage.

Just northeast of Philadelphia, AEM-7 No. 928 leads a train through Croydon, Pa., in the winter of 2009, kicking up snow as it passes. Image by Gary Pancavage

In this 2013 image by Amtrak Corporate Photographer and Videographer Chuck Gomez, one of numerous daily Keystone Service (Harrisburg-Philadelphia-New York) trains is led by AEM-7 locomotive No. 952. Keystone Service trains operate in push-pull service by pairing electric locomotives with cab coaches rebuilt by Amtrak in the late 1980s from the original Budd-manufactured Metroliner cars.

Between 2004 and 2006, the Commonwealth of Pennsylvania and Amtrak undertook the “Keystone Corridor Improvement Project” with the goal of improving the 104-mile rail line between Harrisburg and Philadelphia to allow for all-electric train service, increase top speeds to 110 mph and add frequencies including express options.

AEM-7 No. 942 leads a Northeast Regional train as it makes a scheduled stop at the Wilmington, Del., station in April 2014. “[The locomotive] puts on a light show with flashing ditch lights and blinking strobes -- once a trademark characteristic of Amtrak. With the…retirement of the AEM-7s, this mesmerizing and attention grabbing safety feature will fade into the history books,” notes photographer Matt Donnelly.

Many of the retired AEM-7s have been taken apart for recycling. Here, No. 902 is dismantled at the Bear Heavy Maintenance Facility in northern Delaware in April 2015. Image by Matt Donnelly.

For a new generation, the AEM-7 became theface of a rebuilt and enhanced NEC, which resulted from the multi-year, federally funded Northeast Corridor Improvement Project. Working with the Federal Railroad Administration, Amtrak improved infrastructure such as tracks, bridges and power systems to increase top speeds and cut trip times between Washington and Boston. If the GG-1 represented the initial electrification of the rail lines between New York and Washington and Philadelphia and Harrisburg, the AEM-7 was a worthy successor for a new era. Today, the ACS-64 is poised to carry this mantle for the next generation.

For those still wanting to catch a glimpse of an AEM-7, you can head to the Railroad Museum of Pennsylvania in Strasburg, Pa. Locomotive No. 915 arrived at the facility in summer 2015, joining more than 100 other historic American locomotives and railroad cars, including an Amtrak E-60.

Matt Donnelly is a lead brand communications specialist in the Amtrak Marketing department, and has been employed by Amtrak for 11 years. Originally from Auburn, N.Y., Matt studied photography in high school and college and enjoys taking photos of aircraft and scenery in addition to trains. Check out more of Matt’s railroad photography at railpictures.net/matt

Chuck Gomez is the official Amtrak corporate photographer and videographer and supports projects across numerous departments. If you run into him on the railroad during your travels, say hello!

Gary Pancavage retired from the Amtrak Mechanical department in June 2015. Prior to his departure, he served as the director of operations for High Speed Rail - Mechanical for more than 12 years. Gary is also an avid railroad photographer, and his work has graced various Amtrak publications including the annual calendar and the employee magazine.

Have any favorite AEM-7 memories? Share them with us in the comments section below.